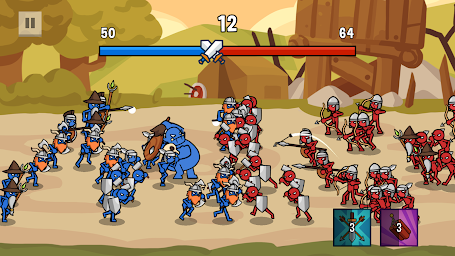 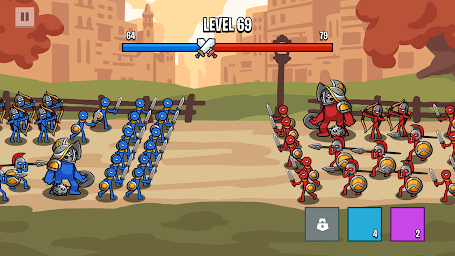 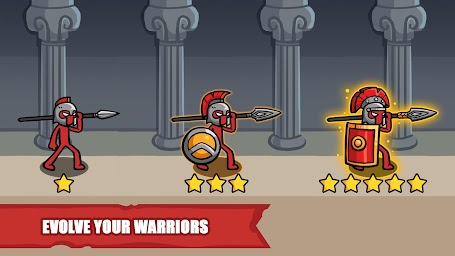 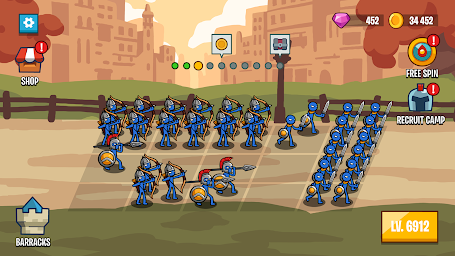 Stick Battle: War of Legions 2.5.5 APK + MOD (Unlimited Money) requires Android 4.0 and up, size 56Mb. You must update your Android phone if it doesn't meet the requirements.

How to Download, Install and Use Stick Battle: War of Legions Mod Apk?

Stick Battle: War of Legions is a strategy game where players will control stickmen warriors against the power of the opposition. With diverse battles, you can recruit warriors and increase strength to create a solid squad.

Stick Battle: War of Legions opens before you challenging battles hen you use the stickmen, warriors, you have. The match takes place under the observation of the players, and you are forced to come up with the right strategy before the match takes place. At the same time, the number of characters is diverse, and you can unlock them in many ways and upgrade the strength of your squad.

THE FIGHT OF STICKMEN WARRIORS

In Stick Battle: War of Legions, players will enter a battle between two factions of stickmen distinguished from each other by the colors blue and red. You will be the leader of the blue army, and the goal is completely understandable that you will find a way to let your army defeat the opponent. At the same time, any pre-battle preparation is necessary because you can’t make any adjustments after the two sides have attacked each other.

The game screen will be divided into two, and you will be able to easily see the number of enemy troops to rearrange your formation properly. At the same time, the field is divided into different squares to drag your character to the position you want. In addition, the number of characters is diverse for you to take advantage of, and new enemies will also appear that you need to be careful of. It is a game you won’t want to miss.

COLLECT POWERFUL WARRIORS TO TAKE DOWN YOUR ENEMIES

The beginning of Stick Battle: War of Legions gives you a certain number of characters, and you will easily get used to the game’s mechanics. At the top of the screen, a bar shows the strength of the two factions as gradually; one side will be overwhelmed by the other. At the same time, everything happens automatically, so the strength of the warriors and the position you arrange for them are necessary. You can easily create powerful tactics.

A great feature that you won’t miss in battle is the upgrade mechanism for your forces. This mechanism is implemented when you merge two types of troops, and their strength will improve, but they will not be able to separate after the upgrade. Therefore, you will need to have a completely diverse number of troops to perform the upgrade; it is necessary when the enemy is always one step ahead of you and possesses new types of warriors.

There are many ways you can unlock new powers in Stick Battle: War of Legions. The first way is to pass through the different levels in the game, and on the progress bar, you will see the icon of the chest. So when you get through that level, you might be lucky enough to unlock a character with different qualities and add to the squad. The second way is to use the resources you have to open different packs or other chests.

As mentioned above, you won’t have any adjustments after everything is done, but you can still call support characters. Specifically, the characters arranged from the beginning cannot be changed, but new characters from the back can appear, and you can only use this feature to a limited extent.

The battles between the two factions of stickmen attract players with:

No, You can download the Stick Battle: War of Legions Mod Apk on your smartphone for free

Q. Why is my Stick Battle: War of Legions Mod Apk not installed?

No, You might have installed an older version of Stick Battle: War of Legions Mod Apk. So please install the latest apk file from this website.

MAX GAMING 123: Really fun and i can play offline meaning i can play anytime

Lypanhaaudi Chin: I love merging games those are my favorite games developers please let's get flying great new like a percent that you can get like in epic l and legendary let's play You're battling other players the developers all these real people or not I don't know I just real people I am just a kid

hack jam33: I played this game to LV 200 and something u can basically click one button and leave it to play, honestly I thought the games was alright cos there were lot of character with lots of abilities but if u wanna be able to make any progress at any reasonable rate u have to watch LOTS of advers also one day I went on the game one day and all the progress I made in the game was lost (everything else on my phone was fine) so was back at LV 1

Anthony !: Horrible, terrible. DON'T DOWNLOAD You can only play this game if you watch all the "free stuff" ads or purchase from the in game store. No way to play this without paying after like 20 minutes. You'll just have to pay or watch ads, or wait like a day for a free spin that'll allow you to play for another 3 levels, which is like 4 minutes of playtime. Graphics are garbage anyway. Controls are too. Animations are cheap. Not to mention the game LITERALLY has NO SOUND. No music, no SFX, nothing.

Seattle Sauce: Why is there an option to turn both sound and music off and on in the settings when there is no sound? Am I the only one who can't hear anything. I even uninstalled to reinstall. Nothing. Do the devs understand just how important sound is for a game? Especially a game like this? Need to uninstall for now as is unplayable as is.

Welcome to My Cave