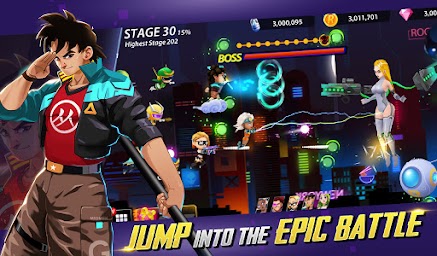 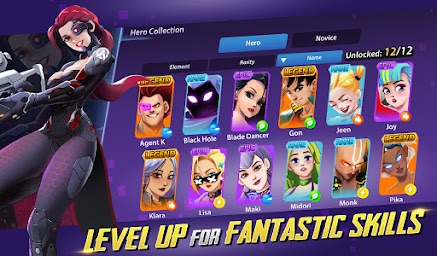 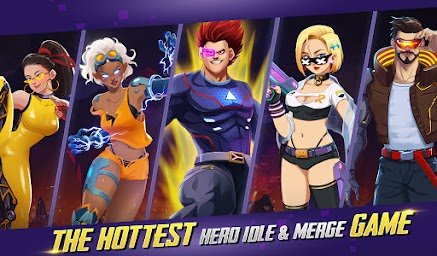 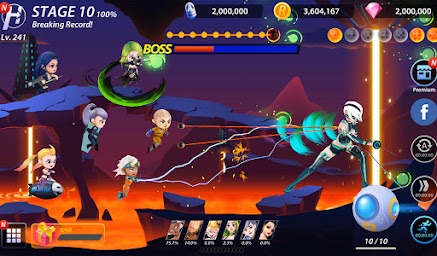 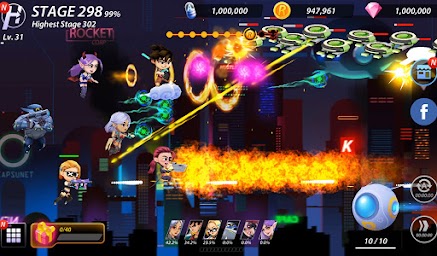 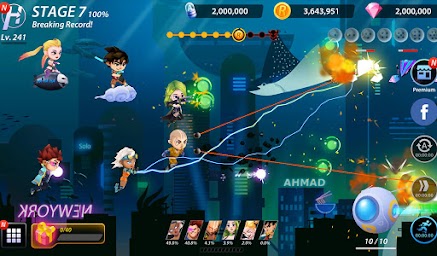 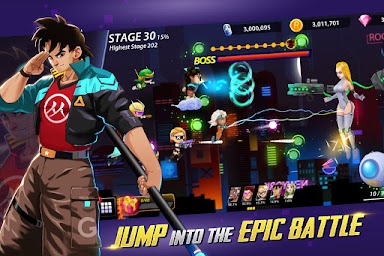 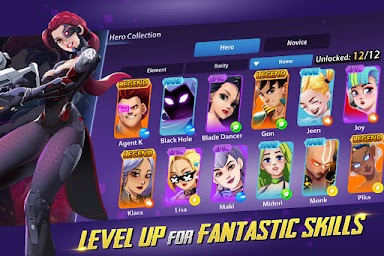 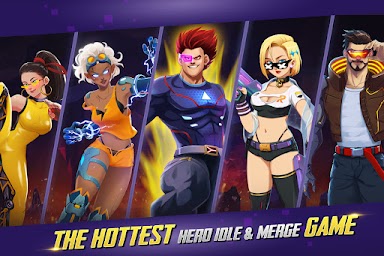 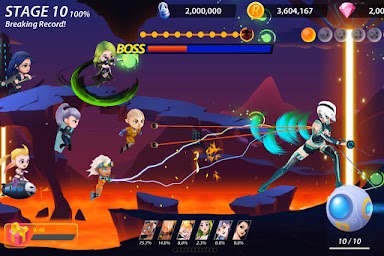 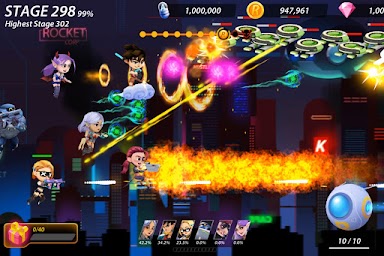 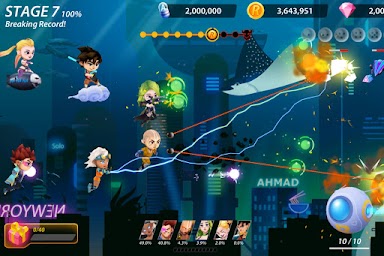 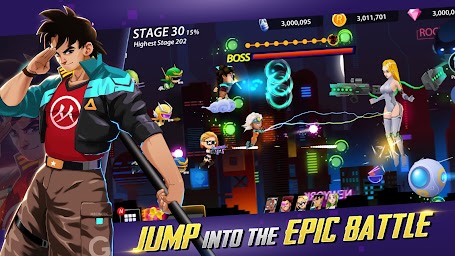 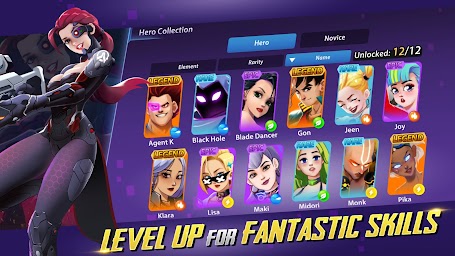 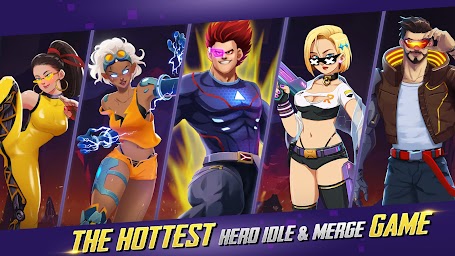 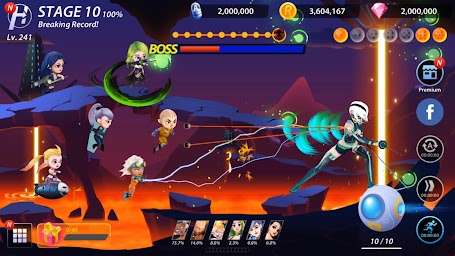 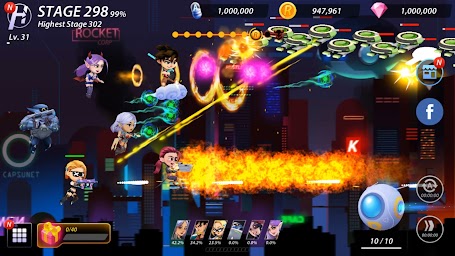 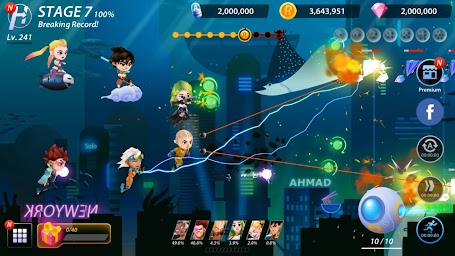 Cyberpunk is a small branch of science fiction. It is one of those scenarios that many people love. From that spawned a great deal of literature, cinema, and certainly video games. It is for that reason that Idle Hero Z was born. An idle game set in the year 2077 about the rise of science and the decadence of lifestyle. Once again, Idle Hero Z will show you the limitless ideas that cyberpunk can create. For example, flying around and fighting giant monsters in the game.

To talk about the origin and development of cyberpunk will be a very long journey. Therefore, we will only focus on the game I am talking about. Idle Hero Z is a game about the future world, specifically 2077. When the world possesses a lot of advanced technology, that produced many powerful warriors with superior armament. The mission of the heroes when summoned is to fight to protect the world. Stop the evil villain’s plot to take this power. From there, there will be a lot of events that break out, and you are the one who has to handle all of them yourself.

Summon heroes from the Hero Ball – a sphere of mysterious ultimate power. Summoned heroes will have many different ranks and powers. The common point of all is that they can fly in the air. The goal is to fight the evil forces that are hovering around this city. Heroes will continuously fire towards the enemy. Every time an enemy wave is destroyed, the next wave will appear immediately. Keep doing this until you defeat a lot of powerful final bosses. This journey will go on very long until you or the enemy are completely defeated. So keep summoning new heroes and fight.

The Hero Ball will rotate continuously and will create up to 10 heroes in a row. You can wait to summon all 10 people or continuously summon each person every time the orb rotates. Depending on the current rank and strength, low-level heroes can fuse. Create heroes of higher rank and strength. From there, create a lot of high-class heroes, up to a maximum of 5 stars. This process goes hand in hand with crafting and equipping many powerful weapons and skills. With all the resources and tactics in hand, show your fighting skills to destroy the evil enemy.

Heroes of the city

Each hero will own his own power. But they all have one thing in common: being able to fly. That is why it is possible to attack enemies at the height of hundreds of meters. There are many types of heroes that you can refer to. From warriors with various weapons, martial arts masters with the power of fists, majestic sworders. Even so, they will all attack with ranged power. In addition to the combination to upgrade the warrior, you will also see many more complete upgrades. Not only does it create more damage in combat, but it also offers many interesting effects.

A battlefield without weapons cannot be called a battlefield. Weapons and upgrades will be equipped for each warrior in the most specific way because a device works for one person but cannot be used by another. Because of that diversity, it takes a lot of time to upgrade them. Not so. It detracts from the interesting experience of players with Idle Hero Z. The enemy will get stronger after each battle. The fact that you upgrade your strength to continue to prove the status is really needed right now.

Don’t worry too much when the place where you are without internet. Idle Hero Z can be played comfortably at any time without an internet connection. Even after exiting the game, the heroes will continue fighting and bringing back the loot for you. When you come back, there will be a small surprise there. So you can play the game at any time and any place. When you have free time, let’s fight with heroes. Still, a noble task is to protect the city and repel the enemy.

Thanks to the instant of the game, you can play it anywhere. As long as you own a smartphone that is not too powerful, you can comfortably fight with the hero. Depicting the future world in the most detailed and interesting way, Idle Hero Z has given players many emotions and interesting perspectives. Surely with a combination of modern and idle future, Idle Hero Z mod will be played and cared for more.

No, You can download the Idle Hero Z - Summon & Merge Cyberpunk Mod Apk on your smartphone for free

No, You might have installed an older version of Idle Hero Z - Summon & Merge Cyberpunk Mod Apk. So please install the latest apk file from this website.

John M. Marzan: 4 star only coz some issues in drone rewards and weekly rewards can no longer claim

Jean Catolin: Its a great game and i love it but when i press weekly task it crash

James McDermott: Log in, collect dailies, log out... like others have said, nothing new. BTW, weekly mission button is bugged, just freezes the game. No, I'm not going to FB to report it, you know about it now.

Andres M: Game is heavily p2w, items that are require to upgrade champions are very few and far in between unless you want to spend. Even the monthly subscription packages don't offer premium currency. Overall it is very slow paced and would not recommend

Spike V1: It's a very basic and generic idle clicker which Is almost an exact rip off of the game Hero Ball Z. There is nothing new or exciting here, just the same old clicker game - but this one is one desperate for your money, it even has a battle pass at 20 bucks and a monthly subscription for almost 50 bucks.......for a idle clicker!!!!????? They even offer free gifts daily....that you have to watch ads to get, so they aren't free at all. Avoid this cash grab.

Jason Bates: Sorry for relying on ads to help progression, guess I used them all up. Was such a fun game in the beginning, but even after the update so many bugs still exist. My recommendation before you you release a game is some serious testing, instead of just thinking you got the code right. Potential gone.

Jeremiah Vazquez: Edit - Gave it another crack after unable to load launch day, plays well. Ad gifts are generous, just so far nothing really breaking the mold. Worth a few more days.

Sarah Izzat: Isn't this just a copy of another game? This game is more pay to win. It literally just copied everything out of another game. Worse graphics, doesn't even seem worth to play. Sorry :)

Ariel Marcellana: Chain quest changed! I just gone offline for 5hours and my chain quest before i go offline is pass stage 300, but when i log in again it became return. Are you freaking kidding me!? I needed that pass stage 300 ASAP to unlock the lvl30 function but i also need the rewards in chain quest! Im done with your game!! This is a piece of trash of a game!! Uninstalling this trash.