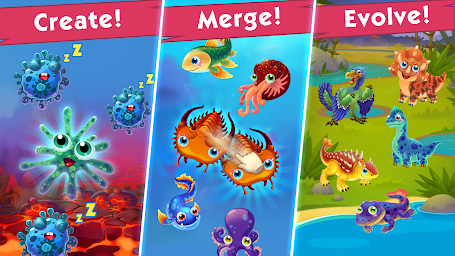 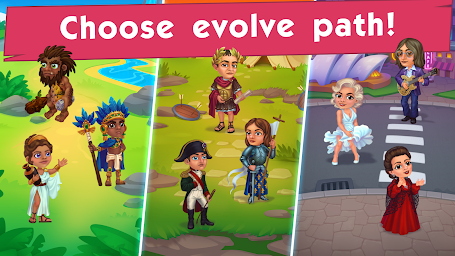 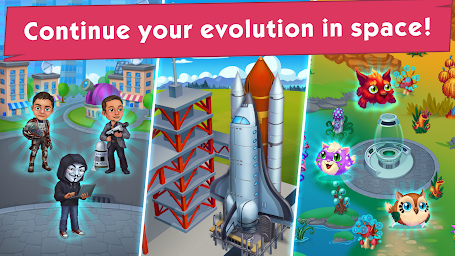 Game of Evolution: Idle Clicker & Merge Life 1.3.23 APK + MOD (Unlimited money) requires Android 4.0 and up, size 90M. You must update your Android phone if it doesn't meet the requirements.

How to Download, Install and Use Game of Evolution: Idle Clicker & Merge Life Mod Apk?

Are you looking for a game that is both simple and engaging to pass the time? For example, playing while waiting for the bus, on the way to work or during recess, … When you are free when you play, Game of Evolution is a perfect choice. Game of Evolution is released by producer Deuscraft. This is a game with no complicated operation at all. Players only need to click on the screen where the character appears to be able to pass the level. Too simple, right? The content of Game of Evolution is quite special. Throughout the game, it is a story of evolutionary chains. The game includes many different parts for the player to slowly explore.

If you are curious about how the world we live in has gone through an evolution, Game of Evolution will explain it all. The creators of the game created it just for you. The game takes place when the earth begins to have the germ of life. It was the Proterozoic era. In this era, life is just single-celled organisms. Experience evolutions under your ingenious hand to reach today’s modern world. Start playing right now you won’t be able to stop. The more you play, the more you are attracted by each colourful series of the evolution of Game of Evolution.

If you’ve ever played the game “2048” then this is a kind of self-play game. You have numbers starting from 2, you merge them. Move the numbers from 2 to 2048. Game of Evolution also has a similar gameplay mechanism. You click repeatedly and then connect the creatures together to form a new evolutionary breed. Opening the game is the Proterozoic era about 2.5 billion years ago. Your task is to click a lot to evolve a variety of new creatures. Link similar species to evolve into a higher level of organisms. You must complete the evolution parts of each stage in the game in order to unlock the next stages.

Game of Evolution requires players to focus and agile. Use your hands to click on the creatures a lot and continuously. Notice the appearance of similar organisms to perform a quick join. Then the opportunity to make money and the rewards will be great. You will receive diamonds every time the creature evolves. Creatures that evolve at higher levels will bring greater rewards. Please work hard to accumulate money and diamonds to buy more characters and develop. The game also has a sharing feature. Share games with friends through apps like Facebook, Instagram, … to earn more money. Thus, performing the tasks in the next parts will be easier.

The game will lead us to explore the process of forming creatures that appeared on earth from ancient to present. This is something that is only available on boring science shows or on television and books. The evolution of creatures billions of years ago will be discovered by you. You will feel like you can go back in time. It’s like sitting on Doraemon’s time machine. Now all of those things have been developed in a very authentic way by Game of Evolution. The game helps you to have more rich knowledge about the evolution of all creatures. You don’t have to have the headache of memorizing them like you did when you were in school.

Why say historical figures are recreated? The authors of Game of Evolution have been very delicate when integrating these characters into the game. In each stage of human development, famous characters will appear. For example, when you have unlocked the period from 500 BC to the 18th century. You will meet the talented physicist Archimedes, the explorer Columbus, Charles Darwin, … to the next stage Accordingly, from the 19th century to the modern world today. At this stage you will meet other historical figures such as the physicist Marie Curie and many others waiting for you in Game of Evolution.

No, You can download the Game of Evolution: Idle Clicker & Merge Life Mod Apk on your smartphone for free

Q. Why is my Game of Evolution: Idle Clicker & Merge Life Mod Apk not installed?

No, You might have installed an older version of Game of Evolution: Idle Clicker & Merge Life Mod Apk. So please install the latest apk file from this website.