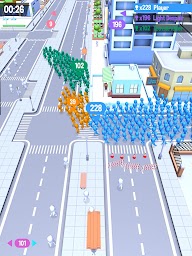 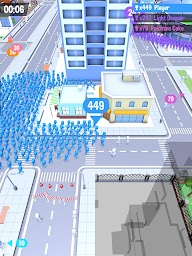 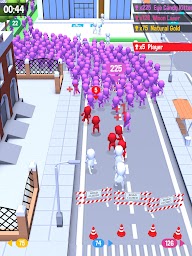 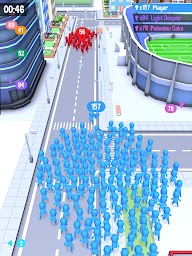 Are you looking for a arcade game to experience? Crowd City MOD APK (Unlimited followers, money) 2.4.0 for Android will be a great choice. Apkgods.net provides a free Crowd City MOD APK, which you can quickly download via the link at the end of the article.

Crowd City 2.4.0 APK + MOD (Unlimited followers, money) requires Android 4.0 and up, size 120Mb. You must update your Android phone if it doesn't meet the requirements.

How to Download, Install and Use Crowd City Mod Apk?

Want to experience something truly fun and unique? Download Crowd City APK and try to make your crowd of people the biggest in town by running into the smaller groups of people. The gameplay here is simple yet very satisfying – and very addictive.

Developed by Voodoo – a French games company for mobile – this is just the latest in a succession of amazing Android games under their umbrella.

Crowd City is a classic .io game that has made it over to Android devices after finding success online. It play a lot like Slither.io – but in a completely different setting. You control a crowd of people running through the city and your goal is to run into other groups of people that are smaller than yours to make them join your group. You’re essentially ‘eating’ the groups of people to make your own group bigger.

The bigger your group is, the more people you can get to follow you by running into them. But be careful – if you run into a group bigger than yours, it will swallow your group and you’ll lose the game. Avoid massive groups and try to make yours the biggest there is!

How to play Crowd City APK

Avoid crowds in the early stages of the game. There are other players out there who will already have big crowds running around the city – avoid them! When you begin the game, you’ll only have one person in your crowd. The goal is to get more people to join you as you run around the city. But make sure that you run away from bigger crowds, or those players will likely chase you down and weaken your crowd – making you easy to take out.

Hunt the small crowds. Once you’ve got a bit of strength behind you, you’ll want to start eating into some of the other crowds. Around 35 people should do the trick. While there might not be much immediate benefit from destroying other players now, later on in the game you’ll be thankful that you did this because now those players can’t compete against you for the top position.

Just tap. In most .io games, you need to keep your finger on the screen to continue moving. Thankfully, this isn’t the case with Crowd City – although many players don’t actually realize this until much later in the game. You only need to tap the screen to make your crowd move in a desired direction, and then you can simply swipe in any other direction you want to move in.

No need to kill them all. When you run into someone else’s crowd, you’ll take their players, which means that your crowd will be bigger. The aim of the game is to have the biggest crowd after two minutes, so you don’t actually need to finish off other players in the later stage of the game – just make sure that you’ve got the biggest crowd to win.

Want to make your crowd way bigger? Download the Crowd City mod APK unlimited time, no ads to play the game for longer than the usual two minutes and make a massive crowd. Tons of fun, try it now!

No, You can download the Crowd City Mod Apk on your smartphone for free

Q. Why is my Crowd City Mod Apk not installed?

No, You might have installed an older version of Crowd City Mod Apk. So please install the latest apk file from this website.

Cameron Jones: The core gameplay is genuinely fun but quickly loses what little charm it had, buried by Voodoo's negligence. The art is hollow; there's just one map; you only play against disguised bots; and the progression system is fixed with very few rewards - to name a few issues. Moreover, there's never a moment without an ad. You often wait 30-60 seconds between rounds for them. It's extremely frustrating. Don't put your time or money here unless you want to see wasted potential

D. Edwards: Updated. I originally loved this game but the most recent update makes it unplayable. Ads take over the screen or freezes the controls. I've tried several times over the last few days without success. I just got frustrated and uninstalled it. Too bad because it was a fun game. Based on other posted reviews others are following suit.

Acronell Zangetsu: I love the gameplay. But all of a sudden these ads are killing the game, they load in and most of the time you can't even close the ads and it keeps the screen dark with controls being completely unresponsive. That, and there are even more ads than before. I can't enjoy playing anymore because the ads literally stop the game from being fun.

Edwin Drury: Neat game but way too many ads and bits of ads interrupting the whole experience. Can't focus on the goal (what is the goal)? On exiting the game, my other phone functions lagged and didn't respond (long delays). Get rid of the excessive advertising and maybe it would be worth playing. I tried it for a half hour and then uninstalled it. As it is it's garbage.

A Google user: The game itself is quite fun, and I'd suggest increasing the time a little to add some fun to it. However, there are too many advertisements that keep pausing my song and going back to play it again is not something I think people would want to do. Ad free would be nice, but only removing the ads and not adding anything to the game itself doesn't make it worth purchasing the game. I have tried turning my data off, but that prevents me from listening to music. (First 3-star review ever)

A Google user: game is pretty good. more skins would be great or possibly changes in landscape. different maps rather than same one all the time. would give 5 star but I purchased a skin, was charged for it but it remained locked. have reached out to voodoo but I have yet to get a response. other than that issue I love the game and play regularly. would recommend as a great time killer.

A Google user: EDIT: Fixed! score changed! I want to give this a 4-5 star review, and I'd be happy to, as well as even purchase ad removal, but it appears that it can't even track consecutive days played over 2 days. Certainly not garnering trust in me sending $ when something that simple is broken. That said, it's very fun and a GREAT time-waster, but could do with optional modes of longer time (no chance to come back if you escape, as is,) and a "last man standing" mode. Very fun, still.

A Google user: It is an amazingly fun game! Great time killer and the ads aren't to much for me! However..... I gave it 3 stars because many times the controls would stop working and when I'm trying to kill a player I would just being going straight therefore missing them! It happens when there is only 30 sec left and that's really annoying if I'm trying to accomplish a personal record so could you fix this?

A Google user: This is such a simple game but very addictive. You have two minutes to run around in a city collecting as many characters as possible, while trying to steal the characters of players who have less than you. I purchased the ad-free version which allows you to start a new game immediately after one has finished; however, you still need to view ads if you want to start the round with more characters than you normally get through your player level.

A Google user: Fun game but becomes monotonous so probably not hours of fun. Great to pick up for ten or so minutes though. Two stars because i paid $4 for ad-free playing and there's still ads! Total b.s. $4 takes full length ads to five second ads after each play. And theres constantly an ad at the bottom of the menu screen. Definitely not worth the money, just deal with the ads because like I said, you're going have to watch one for some length of time.

Battle Of The Boots